Electric vehicles (EVs) and the new generation of power grids "smart grids" are now areas of development competition in countries around the world. There are close relationships between the two technical fields. To expand the charging infrastructure that is indispensable for EVs, there must be a smart grid that uses two-way communication. If EV is popular, the peak period of power supply and demand will change completely. By constructing a charging infrastructure using a smart grid communication network, even if a large number of EVs are simultaneously charged, the amount of charge can be controlled according to the grid load.

At present, in the development of EV and smart grid, countries headed by the United States and China are investing huge sums of money. There are huge business opportunities in the field of charging infrastructure connecting EVs and smart grids. Companies with this view have begun to get involved in the development of charging infrastructure. Among them, the most prominent ones are emerging companies. The reason is that the industrial structure of the charging infrastructure has a similar structure to the IT industry that emerging companies are easy to get involved with. If the EV is regarded as a communication terminal such as a mobile phone or a personal computer, it can be said that the power information flow is the same as the Internet information flow. In the IT industry, the fact that Cisco Systems and US Google have grown from small businesses to huge companies has made emerging companies eager to try. As the future becomes a huge enterprise, emerging companies have begun to comprehensively attack charging stations and use smart meters used for charging management in residential buildings.

Figure: For emerging companies, the charging infrastructure industry reflects a similar structure to the IT industry (click to enlarge)

In the context of the emergence of emerging companies, large companies are also taking action. In April 2010, Nissan and General Electric (GE) announced a joint effort to conduct charging infrastructure research. In 2012, Nissan and France's Renault SA jointly announced plans to mass-produce EVs with a capacity of 500,000 units, making it one of the most globally invested companies in EV development. General Electric, which has an excellent power business, is one of the most active companies in smart grid development. The holding of two companies with strong strengths in both fields may have a huge impact on the future direction of technology development.

The goal is not just to charge Nissan and General Electric why? Nissan, which is committed to EV, is actively developing charging infrastructure, but the benefits of GE's active participation are hard to imagine. At present, GE is only a company that supplies lamps and sensors to its suppliers. It is not active in the automotive business. But such a company, but said that EV is one of its research projects for many years. â€œSince the founder Thomas Edison developed the EV, the companyâ€™s research on EV has continuedâ€ (Juliana Shei, General Manager, General Electric Global R&D Center, Japan). Moreover, Nissan and General Electric have long established an information exchange mechanism between researchers. As part of this information exchange, in mid-2009, Nissan Technicians received an opportunity to visit the General Electric Institute in New York. At that time, they decided to develop EV and charging infrastructure technology together (Juliana Shei). Nissan Motor said that it is an excellent opportunity to rapidly advance the development of smart grid technology (by Nissan) through joint research with world-renowned companies.

The two companies will focus on future charging infrastructure research. Specifically, it opens up new businesses through the discharge of EV batteries - "Vehicle to Home (V2H)" and "Vehicle to Grid (V2G)". V2H refers to the idea of â€‹â€‹using an EV battery to supply power to a home. V2G further expanded the idea of â€‹â€‹V2H and operated the grid by managing a large number of EV batteries. The two companies will spend three years researching. â€œFirst, we will verify the various ideas through simulation. Then we will choose the project that is expected to form a product and start the experimentâ€ (Juliana Shei).

If V2G, which can control the charging and discharging of a large number of EVs, can be realized, it is expected to contribute to the introduction of renewable energy such as solar power and wind power into the grid. For example, when the power output of a solar cell or the like is drastically reduced, by using tens to hundreds of EVs to supply power to the grid, it is possible to reduce the occurrence of an accident such as a power outage. In the future, after the establishment of the EV power trading mechanism, it may be possible to achieve free charging. V2G is not only the ultimate form of charging infrastructure, but also a means of introducing renewable energy.

Will also bring changes to the home

At present, V2G is still in the stage of research at universities and other research institutions, but companies have begun to commit to V2H. For example, at the "Tokyo Auto Show" held in October 2009, Mitsubishi Motors announced the concept car "Concept PX-MiEV" that supplies electricity to houses through PHEV batteries. The 100V discharge can be performed by the vehicle's lithium ion rechargeable battery.

In addition to cars, V2H will also bring changes to homes that accept EV power. For example, it can promote the introduction of renewable energy sources such as solar cells and DC power supply technology. When a solar cell is combined with an EV battery, a DC "home generator" can be formed. This is due to the fact that the battery can be used to stabilize weather-dependent, unstable solar cells. This will greatly reduce the current need to purchase AC power from the grid. Most of the electricity in the house will become direct current, and this power can be directly used for home appliances that operate with direct current, which can reduce conversion losses and improve power utilization efficiency. 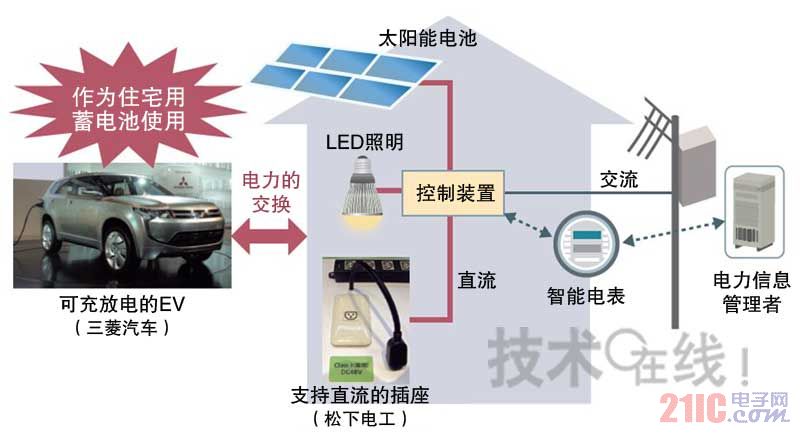 The Panasonic Group is actively developing for the future of EV and residential linkages. The main elemental technologies available for residential use of V2H are now available. For example, in 2009, Matsushita released a DC power supply socket. In terms of "generators" based on renewable energy and EV/PHEV, the company has long been developing the HEMS (Home Energy Management System) technology required. In addition, the development of ordinary charging stations was carried out with the goal of all charging infrastructure. (

This article refers to the address: http://


Parking lamp is either of the two smaller lights attached to the front of a car. Parking is one of the cars set alarm function, when the car parked curbside, on the left side of the parking lights flashing all the time, this feature is mainly used to remind the passing vehicles to avoid scratch during the night. European brand vehicles have this function. Many European laws, such as lateral stop by the road, there is no lights at night must open the outer parking lights, so that in the case of low visibility to other vehicles provide the warning role. Most models operate when the car stops and lights out, and then the turn signal comes to the side where the light is needed, and then the car locks the car. There are also some brands of roadside parking lights with special buttons, such as Mercedes-Benz. The power consumption of parking lights is very low, and it will not cause battery loss for a whole night.