In order to fulfill the promise of bidding for the Olympics (that is, to broadcast digital TV in at least 8 cities in China hosting Olympic games in 2008), China officially announced the first generation of terrestrial digital TV broadcasting transmission standard (DMB-T / H, which is now GB-2006 standard), and plans to formally enforce this national standard in early September this year. During the one-year transition period, all non-national standard systems must be transferred unconditionally to systems that comply with national standards. China is also about to release the national digital TV industry policy, which covers tax, investment and financing, industry, operation, supervision and other related policies, which clearly requires that each digital TV integrated machine sold in China must have a module to receive the national standard terrestrial TV signal .

There is no doubt that this standard will bring tens of billions of dollars of business opportunities to Chinese OEM and ODM manufacturers and third-party independent design service companies, and drive the formation of a new digital and mobile TV industry chain. Although there has been a lot of criticism in the industry since the standard was published, it has at least made the industry understand that other overseas standards (such as DVB-T) have no business opportunities in China. 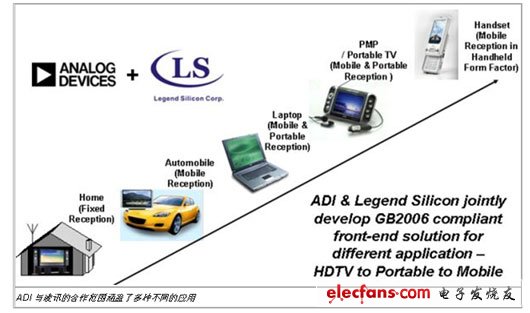 "ADI is fully prepared to meet the needs of China's mobile TV program market," said Mr. Zheng Yonghui, executive vice president of ADI's Greater China region. "The opening of the joint design laboratory of ADI and Lingxun Technology will help this It is an important measure for regional customers to prepare for the rapid and substantial promotion of mobile TV services, and we are convinced that this will soon become a huge opportunity for market sales. "

"Lingxun Technology and ADI have worked together to develop the first receiving front-end solution based on a chip tuner to meet the needs of China Mobile and fixed digital broadcasting," Dr. Yang Lin, Chairman and Chief Technology Officer of Lingxun Technology Say. "The opening of Shanghai United Design Lab is another example of our insistence on promoting China Mobile TV services." 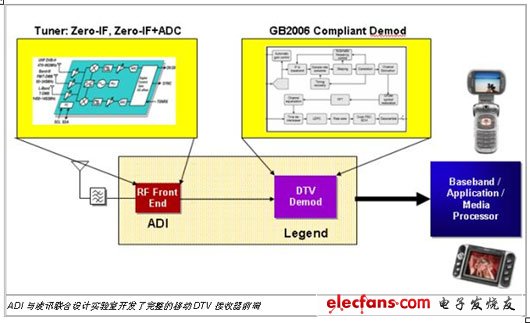 The current GB-2006 standard is mainly developed for fixed and nomadic terrestrial digital TV reception, although it also supports mobile reception, such as Dr. Wang Xiaolin said: "Lingxun Technology's GB-2006 standard demodulator GS-8913- A1 can provide excellent mobile reception capability under severe multi-channel interference conditions. The field test result in Shanghai is that the portable terminal based on Lingxun demodulator successfully receives GB-2006 digital TV broadcast clearly on a car at a speed of 200 kilometers per hour. signal."

However, Frontier Silicon, a British supplier of tuner, demodulator and baseband for the mobile TV market, expressed doubts about it. Its CEO Anthony Sethill said in an interview with this magazine: "Today, as claimed by ADI and Lingxun Excellent GB-2006 mobile reception performance can be achieved by using post-processing technology on the host (such as a laptop), which requires a lot of power. The real challenge is how to achieve a speed of 200 kilometers per hour on a mobile phone with a small-capacity battery Excellent mobile reception performance. "