A circuit capable of amplifying a weak signal is called an amplifying circuit or an amplifier. The integrated operational amplifier is a device that uses a multi-stage DC amplifier on an integrated chip, as long as a small number of components are externally connected to perform various functions.
Because it was used in analog computers as an adder and multiplier in the early days, it is called an operational amplifier. It has more than a dozen pins and is generally represented by a triangular symbol with 3 terminals, as shown in Figure 10. It has two inputs and one output. The upper input is called the inverting input and is marked with "-"; the lower input is called the non-inverting input, marked with "+". 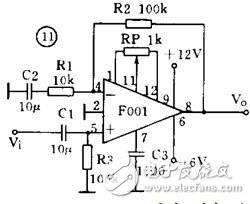 It is also possible to have the input signal connected from the inverting input, as shown in Figure 12. If the circuit requirements are not high, you can not zero, then you can short the three zero terminals. 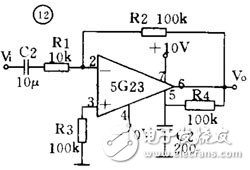 In Figure 13, there is no access to R1, which is equivalent to the infinite value of R1. At this time, the voltage amplification factor of the circuit is equal to 1, and the input impedance can reach several hundred kilohms. 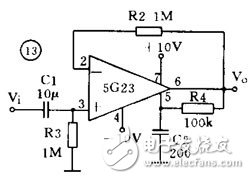 Amplifying circuits are circuits that vary more and more complexly in electronic circuits. When you get an enlarged circuit diagram, you must first break it down step by step, then understand the principle of the first-level analysis, and finally comprehensively. Pay attention to when reading the picture:

2 The most important and difficult problem in the analysis is the analysis of feedback. It is necessary to find the feedback path and judge the polarity and type of feedback. Especially for multi-stage amplifiers, the negative feedback is often added to the previous stage, so it is more detailed. analysis.