1) enabling the robot to move from the initial position to the target position;

2) Using a certain algorithm to enable the robot to bypass the obstacle and complete the corresponding task through some points that must pass;

3) Under the premise of completing the above tasks, try to optimize the robot's running track.

The path planning of mobile robots can be divided into two types according to their purposes. One is traditional point-to-point path planning, and the other is full traversal path planning.

For the sweeping robot, its job task is to clean the room. Its path planning belongs to the complete traversal path planning, which needs to meet two indicators: ergodicity and non-repetition. The so-called ergodicity means that the trajectory of the sweeping robot needs to be spread over all the large spaces to the greatest extent. It reflects the quality of the work of the robot. The so-called non-repetition means that the walking route of the sweeping robot should avoid repetition as much as possible, reflecting the work efficiency of the robot.

The independent path finding of the sweeping robot can be divided into two types: random cover method and path plan type. 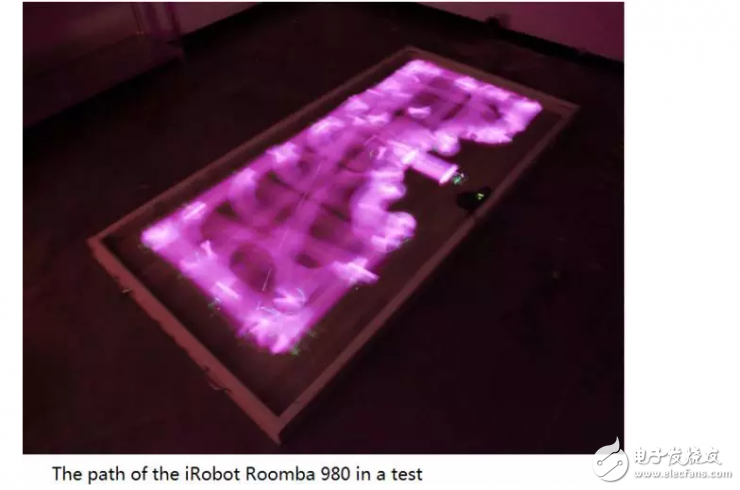 Random coverage method, also known as random collision navigation, but this does not mean that the robot really collides with objects in the environment, nor does it move randomly on the floor without any rules, in other words, "random" in engineering operations is also a It is difficult to meet the requirement. The random cover method means that the robot tentatively covers the work area according to a certain movement algorithm, such as a triangle and a pentagon track. If an obstacle is encountered, the corresponding steering function is executed. This method is a low-cost strategy of changing space by time, such as 100% coverage without time. The random coverage method does not need to locate, nor has an environment map, nor can it plan the path. Therefore, its moving path basically depends on the built-in algorithm, and the quality of the algorithm determines the quality and efficiency of the cleaning.

The iRobot Roomba 3-8 series developed by iRobot of the United States is a typical representative of random collision pathfinding systems.

It is said to use the patented technology of iAdapt intelligent cleaning technology, which is a combination of software and hardware intelligent AI cleaning system. The hardware consists of several infrared detectors in front of Roomba, bottom dust detector and drop sensor, hair. Brush rubber brush speed measuring system and so on, through the information returned by Roomba's hardware, iRobot's own software can analyze the return information, according to the intensity, range, height, speed, current size, resistance of the infrared return information After the parameters, the approximate shape of the obstacle in front is calculated, and then processed by the software, the result is the next cleaning method of Roomba. Roomba calculates the obstacles at a speed of 60 times per second, and according to the environment. More than 40 kinds of cleaning actions, such as surrounding, folding, spiraling, welt, turning and so on.

Planned navigation requires the establishment of an environmental map and positioning. Research on path planning has been going on for many years, and many kinds of methods have been proposed. Different methods have their own advantages and disadvantages, and the scope of application varies. No path planning method can be applied to all environmental information. Among them, the artificial potential field method, the grid method, the template model method, the artificial intelligence method, etc. are typical methods in path planning, and are receiving more and more attention. The typical path planning methods described above are described below.

The area where the robot does not want to enter and the obstacles belong to the repulsive pole: the area recommended by the target and the robot system is the gravitational pole. A corresponding potential is generated around the pole, and the potential at any point is the sum of the potentials generated at that point. The negative gradient of this potential is called the force. The establishment of the potential field is mainly used for dynamic obstacle avoidance. At this time, the gravitational force is the intermediate target in the local environment, and the repulsive force is the obstacle in the local environment. The combined force of gravity and repulsion is used as the acceleration force of the robot to control the direction of motion of the robot and calculate the position of the robot. The method is simple in structure, convenient for real-time control of low-level, and has been widely applied in real-time obstacle avoidance and smooth trajectory control. However, the problem of the existence of the local optimal solution is prone to deadlock, which may cause the robot to stay at the local optimum before reaching the target point.

Setting the actual geometry of the mobile robot can be represented by a square area. During the planning process, the robot is reduced to a point, and the obstacle boundaries in the environment are expanded and blurred. The grid is used to represent the workspace, that is, the workspace is divided into squares of the same size, and the grid size is the same as the geometry of the robot.

The environment is represented by the grid method: the workspace of the robot is divided by a grid of the same size, and the grid is used to represent the environment. Each grid is one of two states, either in free space or in the obstacle space. . The method is simple and easy to implement, which brings a lot of convenience to the realization of path planning, and has the ability to represent irregular obstacles; its disadvantage is that the efficiency is not high, and there is a contradiction between space-time overhead and precision. The size of the grid directly affects the amount of environmental information storage and the length of planning time. The grid partition is large, the storage of environmental information is small, the planning time is short, the resolution is reduced, and the ability to find paths in a dense environment is weakened; the grid partition is small, the environment resolution is high, and the path is found in a dense environment. Strong ability, but the environment has a large amount of storage. So the size of the grid directly affects the performance of the control algorithm.

Another common method is the template model. DeCaravalh proposes a map that relies on a two-dimensional clean environment and is based on a template that completely traverses the path plan. To complete the full traversal path planning, DeCaravalh defines five templates: Towards Model, Side Shift, Backtracker, U-turn model, and U-turn alternate model. The template model method is based on prior knowledge and previous environmental map traversal robots to get the environmental information to match the predefined template. Therefore, the entire path is composed of a series of templates. In this method, in order to simplify the path planning process, the environment is expanded in advance, so that such a small and flexible robot can be considered as a particle. The template-based model completely traverses the path planning. It requires the memory of the environment model and the template to be defined in advance, so it is not easy to deal with the changing environment, such as a sudden obstacle in the process of traversing the robot.

In recent years, many scholars have used modern computing intelligence technologies such as fuzzy logic, artificial neural networks, genetic algorithms to solve the path planning problem of robots, and have achieved some gratifying results.

Fuzzy control method application and path planning is a very distinctive method. It is a planning method commonly used in online planning, including modeling and global planning. It uses several sensors to detect the condition of the road ahead and obstacles, and formulates fuzzy control rules based on the driver's driving experience, which is used to process sensor information and output control such as speed, acceleration, and angle to guide the advancement of the car. The biggest advantage of this method is that the participant's driving experience is not large, and it can realize real-time planning. It can overcome the local pole problem easily generated by the potential field method, and the effect is ideal.

Neural networks have been applied to many engineering fields, and the robotics field is no exception. There are also many applications of neural networks in path planning. Tse is a BP neural network for cleaning the transportation of mobile robots from one place to another. This model enables self-navigation path planning through self-learning. The complete traversal path planning for obstacle avoidance can be achieved through offline learning, and has three steps of motion behavior, route planning and global path planning. During the motion behavior phase, the robot collects 3D environmental information through various sensors, and then inputs this information into the BP neural network. The robot can clean the surrounding area until there is no uncleaned area around. During the route planning phase, the cleaning robot decides that the shortest path leads to other unswept areas in the workspace. In the global path plan, a global environment map is generated, and then the robot starts from the starting point and cleans the entire workspace.

Genetic algorithm is a search algorithm developed by John Honland in the early 1970s for natural selection and population genetic mechanism. It mimics the reproduction, mating and mutation phenomena that occur during natural selection and natural genetic processes. It treats each possible solution as an individual in the group (all possible solutions) and encodes each individual into a string form, evaluating each individual according to a predetermined objective function, giving a suitable value . Some individuals (ie, candidate solutions) are always randomly generated at the beginning, and these individuals are cross-combined according to the fitness of these individuals (selection, intersection, variation) to obtain a new individual. This group of new individuals has evolved from the superiority of the previous generation and is obviously superior to the previous generation, so that it gradually evolves toward a better solution. Genetic algorithms do not require modeling and complex operations for complex optimization problems. As long as the three algorithms of the genetic algorithm can find the optimal solution, they are widely used in various fields. In the field of robot related research, genetic algorithms have been applied to the trajectory generation of robots, the path planning of multi-robots, and the obstacle avoidance of redundant robots.

On the other hand, when genetic algorithms are combined with techniques such as fuzzy logic and artificial neural networks to form an intelligent learning and evolution system, it shows its power. Many scholars have used the above intelligent methods to make path planning attempts. For example, Toshio Fukuda et al. proposed a robotic navigation system with â€œstructured intelligenceâ€. It is based on a fuzzy controller. A hierarchical decision-making mechanism for path planning, and based on feedback rewards, penalize information for learning and evolution. The advantage is the system's self-learning ability, which is also the focus of its research. However, they make the system more complicated and less efficient.

The path planning technology of mobile robots has achieved fruitful results, but each method has its own advantages and disadvantages, and there is no one method that can be applied to any occasion. For example, the template matching method relies too much on the past experience of the robot; the artificial potential field path planning method usually There are problems with local minima and excessive computation. However, with the continuous development of technology, new problems or alternatives will emerge in these problems. At the same time, the field of robot applications will continue to expand, the working environment of robots will be more complicated, and the field of mobile robot path planning will continue to deepen.